Living in the Seef area of Manama, the eating-out options weren’t a problem. We had the Seef Mall right across the street and hence, even at night we used to just walk out for a quick meal at the food court. Little did we know that in that very mall, stood a prestigious food institution in the form of Naseef Restaurant. A ice-cream heaven, the restaurant served a scrumptious mix of Arabic, Indian, Lebanese and other Asian food. Known for their unbelievable Mango Ice Cream too, Naseef Restaurant has some really innovative ice cream flavours as well. I tried the very unique Rice dessert flavour called Mahalobiya and also the creamy rich & chunky brownie flavour. My final selection was the waffery yet smooth Kit Kat ice cream. Eating that ice cream was a blissful experience. 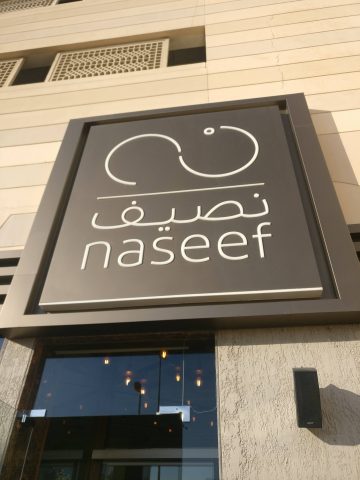 Rewinding a couple of hours before that, we also had our lunch at Naseef Restaurant. From their invention of Black Sesame Bread (a nice coarse brick oven bread with a nice toasty flavour) best enjoyed with their in-house Tahini and hummus. We also tried a lot of their ultra-fresh and delicious salads. From the super-crunchy and fresh Fattoush, to their another invention of the Beetroot and Pomegranate salad, the start to the meal was indeed fantabulous.
Cut to the main-course, apart from the hearty Biryanis (we tried the Chicken & Lamb variants) I also decided to order a dish that originates from my hometown, Delhi. Yes, it was time to try Butter Chicken in Bahrain. The utter first-look of the dish made me ecstatic. The glowing red colour of the gravy and a drizzle of fresh cream meant that the Chef knew his butter chicken. The first bite of the curry with Khabous was like Nirvana, it was everything that a butter chicken could be for me. A nice smokey flavour with balanced umami (coming from tomatoes) and the right amount of sweetness,. That didn’t overpower the overall flavour. The well-cooked juicy chunky pieces of clay-oven grilled chicken covered the protein aspect of the curry very well.

All in all, our meal at Naseef Restaurant was way more than satisfying. It was soul-satisfying to say the least.